For thousands of years, human activity left the peat bogs of the Flow Country largely untouched. But during the twentieth century, improvements in technology meant that land previously seen as barren and useless could be drained for agriculture and forestry. Government tax incentives in the 1970s and 1980s led to a big increase in forest planting, and large areas of bog that had been treeless for thousands of years were drained, gouged with furrows deep into the peat, and planted with fast-growing conifers. The Flow Country became notorious as a battleground between developers who wanted to extend the forestry plantations and conservationists who were concerned at the destruction of such a rare, undisturbed habitat.

In the end, the tax breaks that were driving the forest expansion were stopped, and it’s now clear that forests planted on deep peat will never produce a worthwhile crop of timber. There is also now a much greater understanding of the importance of the Flow Country and much of the highest quality peatland is protected as part of a Special Protection Area and Special Area for Conservation. This type of deep-peat afforestation would never be permitted nowadays, not just because quality bogs are now protected by law, but also because it would be seen as poor forestry practice.

Many organisations have now come together under the umbrella of the Peatlands Partnership to implement The management strategy for the peatlands of Caithness and Sutherland.  Its vision is for a landscape underpinned by a healthy environment, at the heart of which is the great expanse of wild peatland. Forestry and agriculture are part of a mosaic of productive land use in the straths, the fertile valleys in between the broad sweeps of hill and bog, and on the coast.

Since 1994, research has been going on into techniques that can restore drained and damaged bogs, initially funded through a major LIFE (EU) Project. Since 2001, RSPB Scotland, Scottish Natural Heritage, Forestry and Land Scotland, Plantlife and private land owners have been working together to apply those techniques to large areas. There was a major push on restoration on the RSPB Forsinard Flows reserve between 2014 and 2019 as part of the Flows to the Future Project and this work is continuing beyond the project through Peatland Action funding. So far, over 2,600 hectares of forestry have been restored to blanket bog, and the lessons learned in the Flows are now being applied in many other countries. Listen to an Sottish Natural Heritage Blog on this topic here. 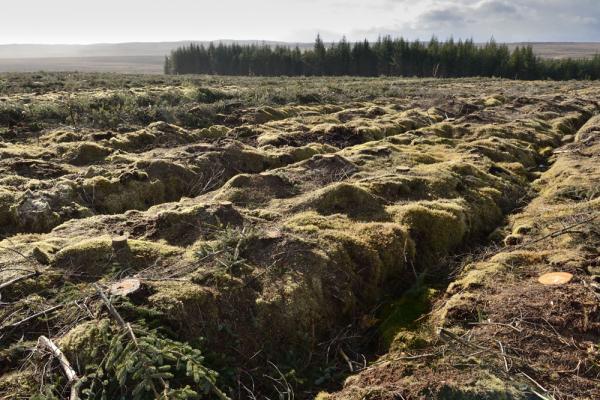 Restoring a bog from forestry takes a lot of work. It begins with felling the non-native conifers. They are removed if they have grown well, and the timber can be sold (although it is often poor quality and can only be used for pulp and biomass). If they have not grown well they are mulched (chopped into small pieces). As much "brash" (all the branches and remaining parts of trees) is removed as possible, as this allows the bog to recover more quickly. It reduces the levels of nutrients going into the bog, leaves a more even surface, and encourages the peatland waders to recolonise. Forestry drains and furrows are then blocked. This is usually done using peat dams, but plastic dams are used for larger drains. For many years the land needs maintenance to remove any new trees growing from seeds left in the soil or blowing in from adjacent plantations, as well as to manage the amount of grazing by deer. Gradually these areas recover, water tables rise, bog plants colonise, and in due course, bog wildlife arrives. 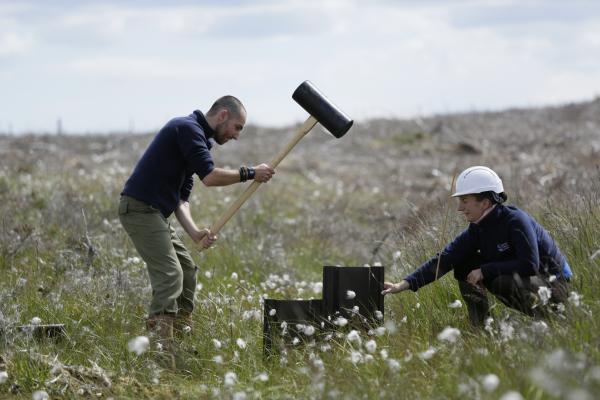 This novel “forest to bog” restoration work requires us to develop new management approaches, and discover new scientific knowledge. At Forsinard Flows, RSPB Scotland is testing various approaches to restoration of formerly forested areas using large-scale management trials. Techniques range from ‘cheap & cheerful’ to ‘top of the range’. An important question we will answer is, what exactly do we gain by spending more money per hectare on restoration? Are cheaper approaches ‘good enough’, allowing us to restore a larger area overall?

Restoring peatlands is a slow process but we are now getting clear scientific evidence that bog conditions are re-establishing in the earliest forest-to-bog restoration areas at RSPB Forsinard Flows, in terms both of vegetation  and water quality . Moisture-loving plants are well established after 15 years, and as bog plants re-assert themselves, we expect them to re-create the low nutrient, acid conditions, that define bog habitat and attract bog wildlife.

Meanwhile, the management trials at Forsinard present great opportunities for climate scientists from academic partners. The depth of science work going on around peatland restoration in the Flow Country recently featured in a special issue of the journal Mires and Peat . Using cutting edge technologies like eddy-covariance flux towers, our research partnerships are measuring how quickly the restoration areas resume their uptake of carbon from the atmosphere. In some cases, estimates suggests that this is more or less fully restored after only 5-10 years . During the restoration process, the pattern of carbon dioxide exchange between peat soils and the atmosphere diverges from that of forestry plantations, and starts to resemble that of intact bogs . These changes in soil and vegetation can then result in older restoration areas becoming net sinks of carbon, effectively starting to help cool the climate, just as intact peatlands do. The links in this section will take you to scientific papers with more information.

If you would like to learn more about specific restoration techniques used, you could take a look at the demonstration videos by Scottish Natural Heritage.

In the early years of restoration the trees were left lying where they had been felled, as the trees were still quite small and there was then no market for them, also machines had not been developed that could work on the deep peat without causing damage. At RSPB Forsinard work has been going on to speed up the restoration process in these areas where the trees were not taken off. Machines are used to crush the tree remains and push them into the forestry and ditches and furrows. This helps to block up the ditches and furrows and also makes the surface of the bog more even. This makes the recovering peatland more attractive to peatland waders as they like to be able to watch out for predators approaching. 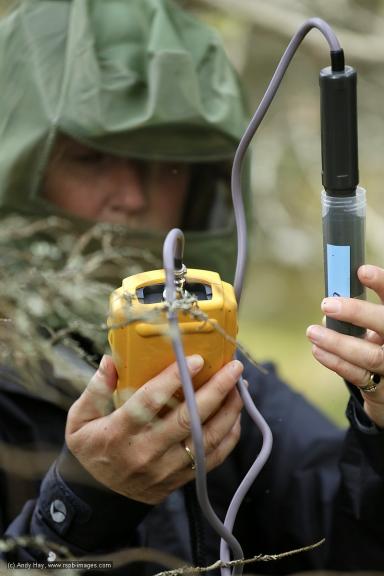 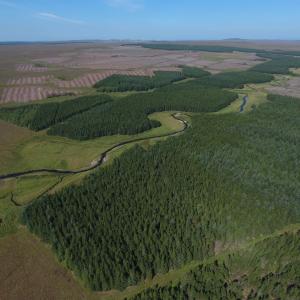 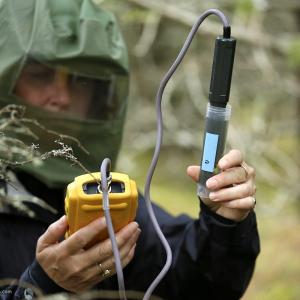 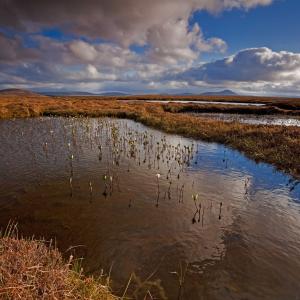