Peatland species in the Flows 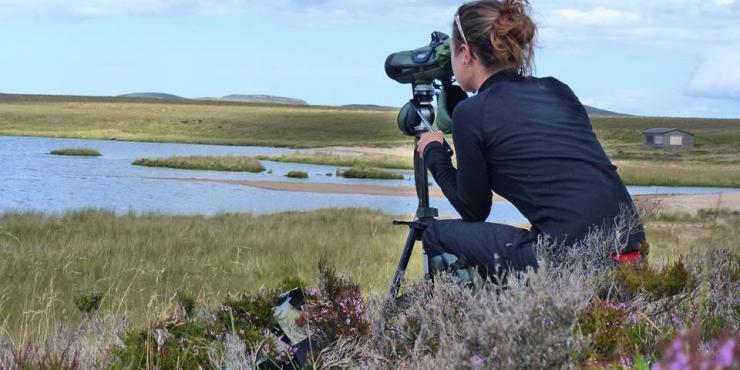 It has been a busy survey season so far for the volunteers and staff, on the reserve at RSPB Forsinard.  The final breeding bird surveys of the year took place in August, with loch surveys for common scoter and red and black throated divers to assess the success of their breeding attempts.

The flora and fauna are a huge part of what makes the flow country so special, and it is home to several important species of birds, such as hen harriers, common scoter, red and black throated divers, golden plover, dunlin, curlew and greenshank.  The survey season is hard physical work, however, the amazing sightings such as a brood of common scoter ducklings floating across a loch or hen harrier performing their enthralling sky dancing displays as they attempt to attract a mate, more than make up for the sore feet.

The survey season also sees us recording a wide variety of things that bloom, fly, crawl and hop!  The flow country plays host to unique and specialist plants that can survive in nutrient poor soils, such as the sundew and butterwort, which have adapted to get their nutrients from capturing insects instead.  We also record day flying moths, butterflies, dragonflies and damselflies, that make the bog their home, often making it through the winter in a different form, before using the long summer days to ensure that they breed and produce new generations in the peatlands.  The amphibians and reptiles of the bog love the warmth, wet and sunshine of the summer, with lizards and adders found basking in the sun, and frogs and newts using the bog pools to lay their eggs.

The bog quietens down in August and September, as species move south or to the coast, go into hibernation or torpor or die back to overwinter, but we all listen with great anticipation in the spring for the first song of the skylark, which heralds the start of the next breeding season on the bog.