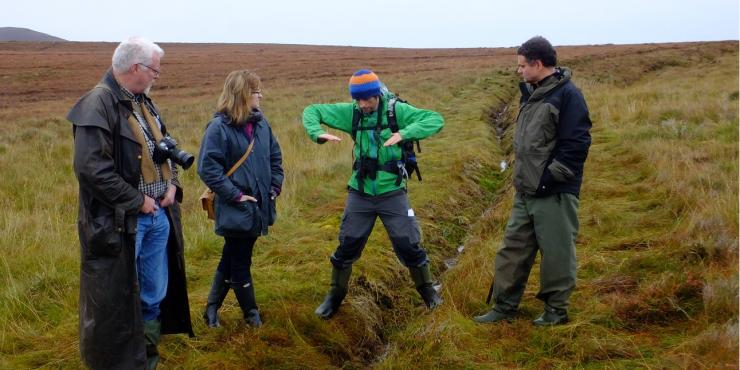 Across Caithness and Sutherland thousands of kilometres of hill drains were dug on open blanket bog. These drains were dug with the goal of improving grazing and welfare conditions for livestock and game by lowering the water table of the bog and removing surface water (Holden et al. 2004). Initially these hill drains were dug by hand but the process was mechanised in the years following the Second World War with the development of wide tracked tractors and deep ploughing techniques. Much of the impetus for drainage of the Flows was driven by government subsidies in the 1950s and 60s and later by tax breaks for forestry planting in the 1970s and 80s.

However the benefits of hill drains were not realised. For example improvement in heather growth on peat bogs tended to be restricted to a narrow band a half metre either side of the drain (Phillips and Moss 1977) A long term study of the effect of drainage on the vegetation of a blanket bog in the North Pennines showed there was no significant increase in the cover of heather following drainage and the authors concluded there wasn’t any recognisable benefit to game birds as a result of drainage (Stewart and Lance 1991). A two year study into the effect of blanket bog drainage on upland sheep grazing in Wales found that sheep preferred to graze in non drained bog and there was no increase in grasses adjacent to drains (Wilson et al. 2011a).

On the other hand there are proven negative outcomes of moorland drainage on land management and the environment. Open hill drains have a tendency to erode (Phillips and Moss 1977), increasing in both width and depth, and can eventually erode to large gullies. If drains are dug close together the bank between the drains can erode to create new drainage lines and large areas of bare peat.  Bare peat is hydrophobic, preventing infiltration of rainfall which can increase runoff from the bog; in contrast the rougher vegetated surface of intact bogs can slow down water flows in runoff (Labadz et al. 2010).

In some cases, drained peatlands in the upper catchment can contribute to downstream flooding by increasing the speed of runoff from the bog (Holden et al. 2004), In other cases drainage can also delay runoff from the bog so that the flood peak from the drained hillslope corresponds with that of the catchment flood peak  (Holden et al. 2004).  Eroding peatlands can result in vast quantities of sediment being transported into downstream watercourses which can impact negatively on aquatic ecosystems. For example, salmon catches in the Ribble Catchment in Lancashire declined by over 70% following herring-bone gripping of its upper catchment, compared with the nearby undrained River Lune catchment which suffered no declines in catches. Drainage of the upper Ribble catchment resulted in faster runoff from the bog leading to bank erosion downstream and increased sedimentation.  Increased sedmentation caused ‘cementation’ of the gravel in the redds making them unsuitable for breeding salmon (Stewart 1963). In another study the taxon richness of stream macro-invertebrates associated with good water quality was shown to be significantly lower in drained peatland catchments compared with that of intact peatland catchments. This reduction in species associated with good water quality was a result of an increase in the sedimentation of fine particulate organic matter from eroding drains upstream (Ramchunder et al. 2012).

Eroding drains can be hazardous to game birds like red and black grouse, whose chicks can fall in and drown (Phillips and Moss 1977, Adamson 2007). On Blawhorn Moss, a lowland raised bog, grazing sheep had to be removed for safety reasons because the drain bisecting the bog had eroded to such extent that it became hazardous (SNH 2014). Drainage of the bog can result in subsidence and oxidative wastage of the peat deposits, releasing stored carbon into the atmosphere and water (Lindsay et al. 2014). In addition the cover of peat forming Sphagnum mosses has been shown to decline as a result of drainage impact (Steward and Lance 1991) and both processes can interact to turn the bog from a potential carbon sink to a carbon source.  Overgrazing combined with burning can interact with drainage effects to further degrade the bog vegetation and carbon stores.

In part two I will discuss restoration of open bog peatlands.

Wilson L., Wilson J. & Johnstone I. (2011b) Addressing stakeholder concerns over peatland restoration: a case study of the impacts of drain blocking on hill farmed livestock in Wales.