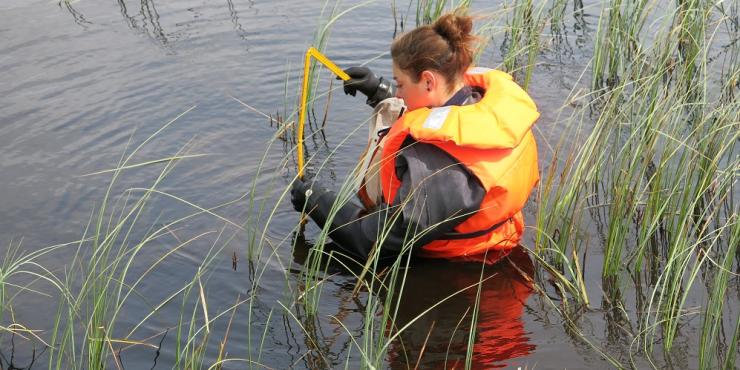 The summer has flown past, as it usually does up here in the North of Scotland. Although I’m writing this after my internship has finished, I’d like to share my unforgettable experience and impressions with you. So here we go:

Last year I spent the summer at RSPB’s Forsinard Flows nature reserve as a residential volunteer. I had some extremely interesting and exciting field experiences and they motivated me to apply for this year’s internship. So there I was again as Freshwater and Peatland Science Intern, tada! Thanks to last year’s stay I already knew my ways, short-cuts and favourite lochs and least favourite boggy pool systems (where I regularly filled my wellies with bog water on my bird survey routes) on the reserve and was familiar with part of the work.

There are two ongoing Conservation Science projects in the Flow Country, one concentrating on forestry and peatland restoration (“forest-to-bog”), the other on Common Scoter research. 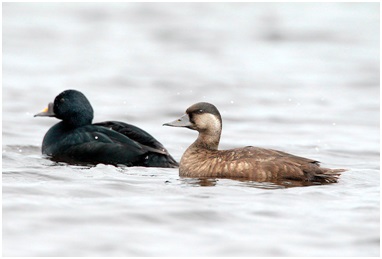 A pair of Common Scoters

The UK breeding population of Common Scoter has been declining for many years and has halved between 1995 and 2007 leaving the UK with around 50 breeding pairs. Today, most of the remaining breeding scoter population can be found on the blanket bog in the Flow Country of Caithness and Sutherland or in the West Highlands. Due to these developments, it is not surprising that the species is on the Red List as a UK breeding bird. Knowledge about potential threats to breeding scoters is improving but the actual reasons for the species’ decline are poorly understood. Further scientific evidence needs to be collected to uncover the cause of decline and to develop a management strategy that helps the species recover. That's where our project comes in.

What did the project involve? 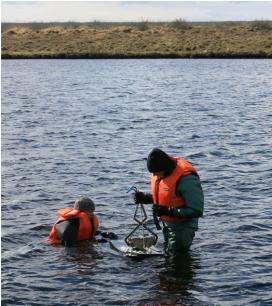 Me and Paul with the sediment grabber

At the beginning of the spring we set up camera traps near the shoreline of lochs in order to give us information about birds and mammals that use the shallow zones where scoter broods feed. The cameras served as spare set of eyes for us recording wildlife that roams the bog while we are not out there, including birds such as herons, greenshank, mallard, teal and widgeon, and mammals such as red deer and otter (not to mention the occasional dubious looking researcher!).

During the summer a large proportion of field work involved sampling freshwater invertebrates, potential scoter food items, which are found in the lochs. Invertebrate sampling was carried out on two weekdays using coloniser traps, grab sampling, different netting techniques and visual counts. During the winter invertebrate samples will be sorted, identified to family level and measured to allow biomass conversion.

The second RSPB research project I worked on was the project looking at different methods of restoring afforested blanket bog (planting trees on peatland drains the bog and has a big impact on its functions and furthermore on climate change). Tree removal and drain blocking is expected to restore the damaged peatland and promote its important ecosystem functions in carbon storage and biodiversity. In order to monitor the recovery processes after tree removal, dipwell data collected before and after felling will be compared. Dipwells are made out of a plastic tube with drilled holes that is placed in a hole dug into the ground and used to measure the depth of the water table. Our task this summer was to relocate those dipwells shortly after felling. Although this can be as difficult as looking for the back of an earring on a grey carpet or a dropped mobile phone on the open bog, we eventually managed to find a good number of dipwells and I hope the successful search continues!

Days out with external researchers

During my internship I had the opportunity to go out to the field with several external researchers. These individuals are working on different topics related to the effect of peatland restoration on carbon and other gas dynamics and water quality as well as projects on scoter research. It was very interesting to get insight into all these projects.

At this point I’d like to thank my line manager Paul Stagg for setting up an interesting internship plan (and jolly field days) and all the external researchers for taking me out, sharing their knowledge with me and patiently answering my questions.

I was proud to be a member of the Conservation Science team and contribute to the important work done in Forsinard. I am very happy to have had the opportunity to apply and expand my personal knowledge and skills on a more scientific basis and very much enjoyed my second summer in the Flows! It’s a lovely place with a stunning landscape, beautiful wildlife and a great staff team and I’d recommend a visit anytime. In any case, I’ll be back!