Flows to the Future - My experiences as intern 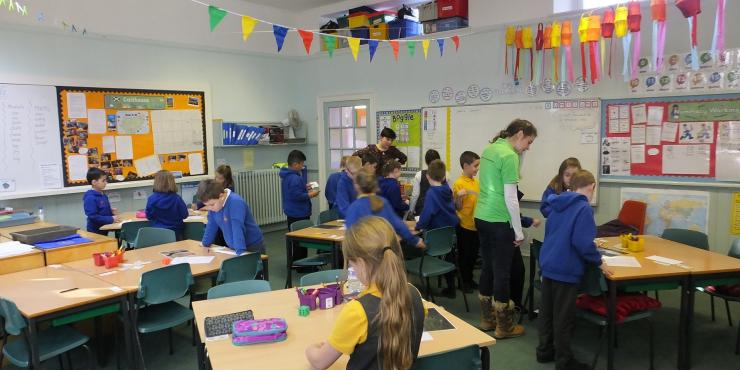 I started writing this post three times before giving up and starting over once again.  I have learnt so much as an intern and had the opportunity to be part of such a great team, that it is difficult to know where to begin. So let’s keep things simple.

I’m Anna, People Engagement Intern for the Flows to the Future Project.

My four month internship began at the end of October, arriving just in time to welcome in the winter. Although Forsinard is often referred to as ‘Frozenhard’, it is not as cold as you might expect, and the few frosts we’ve had have brought with them some of the most beautiful mornings at Forsinard.

Although the bogs had gone mostly quiet with the winter season, there has been plenty of work still to do.  As People Engagement Intern, I assist the Flows to the Future Project Communities Officer, Jenny Middlehurst, and Learning Development Officer, Sjoerd Tel, with the preparation and delivery of events and activities relating to communities and schools.

I have gained so much valuable experience in environmental education and community engagement working as an intern with the project.  Amongst other things, I have had the responsibility to develop a plan for the schools workshop at the Caithness International Science Festival, taught secondary school pupils peatland plant ID skills, and gained experience planning community events in a rural area.

I have also had the opportunity to do a volunteer exchange with residential interns from other RSPB reserves, gaining insight into the conservation work done at other reserves and the kinds of community events being run elsewhere.

I would encourage anyone thinking about volunteering at Forsinard to go for it. The least you’ll gain is living and working in a beautiful location, while you’ll most likely gain so much more working with a great bunch of people on internationally important conservation work and engaging with people about the peatlands.

Just as I’m leaving it is starting to feel like life is returning to the bogs.  Days are lengthening and bird song is starting to be heard once again as the peatlands reawaken after their winter hibernation. I am hoping to return some time later in the year and have no doubt that the spring and summer will have had a drastic effect on the peatlands, changing the landscape from something I have come to know and recognise into something altogether foreign.  It is a change I am excited to see.