Flows to the Future Artist in Residence Blog - Hannah Imlach

As an artist, I am interested in complex ecosystems, mathematical patterns and structures found in nature, engineered objects, sustainable technology and infrastructure. My practice focuses on environments, such as the Flow Country, which are undergoing radical transformations indicative of climate change or methods of mitigation like habitat regeneration and renewable energy production. The Flows to the Future residency and commission is a wonderful challenge, expanding my ongoing research and giving me the opportunity to work directly with scientists, conservationists and wardens to understand the active research and restoration undertaken in the unique peatland habitat of Caithness and Sutherland. I am currently bringing together research and inspiration from my Flow Country residencies to create a new body of sculptural artwork which will be temporarily installed in the Flows during Spring 2018 and exhibited during Summer 2018.

I began my residency in May this year, spending two weeks based in the new RSPB Forsinard Flows Field Centre. I spent the majority of these days observing and participating in field work, which included: measuring the water table at sites undergoing active restoration, where different techniques for the removal of conifer plantations are being piloted and their success monitored; learning about conservation efforts to understand the decrease in the Common Scoter duck population; and donning a drysuit to help with loch sampling. However, my most influential experiences were with two amazingly enthusiastic female scientists, both engaged in leading peatland research: Roxane Andersen of the Environmental Research Institute (ERI) at The University of the Highlands and Islands (UHI) and Myroslava Khomik of the James Hutton Institute in Aberdeen. 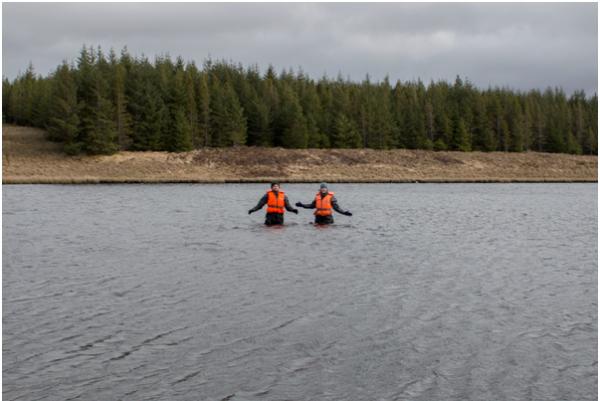 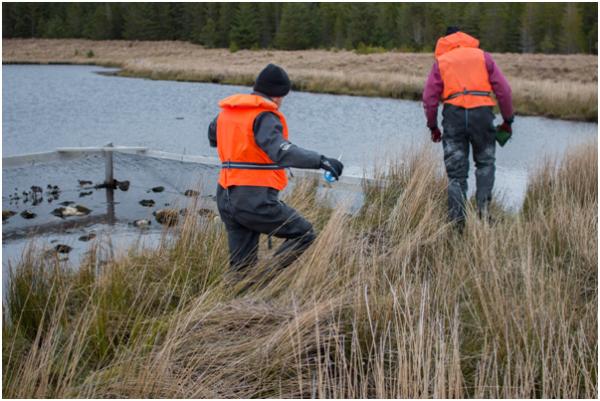 A full day of loch sampling with Paul and Massimo working on a project to monitor and conserve the Common Scoter, a small diving seaduck on the Red List of threatened species.

Returning to the Flow Country in August, I focussed my research on two aspects; the species of peat-forming Sphagnum moss which are indicative of changing conditions in the bog, and the flux towers placed at various sites across the peatland to measure atmospheric conditions and carbon exchange in areas of restoration, pristine bog and standing forestry. Whilst learning to identify Sphagnum with Roxane, we spoke about the process of peatland formation, the effects of forestry on the water table and ground nutrient levels, and the scope of research taking place within ERI. Roxane also hosted me at UHI in Thurso, where I was able to watch student presentations and learn about research into the native woodland of the area, pieced together from the microscopic pollen grains of species like dwarf birch, elm and alder preserved in the peat. I was also able to borrow a copy of ‘The Intricate Beauty of Sphagnum Mosses’, a publication with detailed images and information on the internal microscopic structure of Sphagnum species; a complex and beautiful integral framework that facilitates the retention of huge quantities of water. 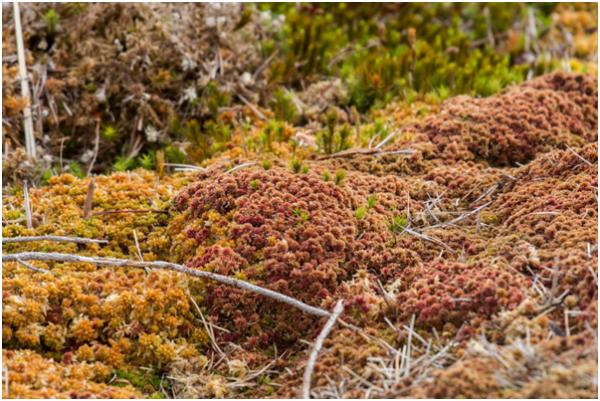 During this second residency, I also returned to the field with Myroslava, who was collecting data from the four flux tower sites. On an earlier visit to the James Hutton labs in Aberdeen, I gained a rudimentary understanding of the importance of this network of flux towers and their data, which allow scientists to model future climate scenarios, research which directly affects policy decisions. The flux towers are an interesting collection of instruments in the peatland, similar to a weather station. One of their primary functions is to define the tipping point where the damaged peatland under restoration begins to absorb carbon again. I am interested in the instrumentation of these flux towers as source material for sculpture, and was particularly drawn to a 3D anemometer, a golden rain gauge with internal seesaw and a small leaf wetness sensor, a circuit board acting as a plant. 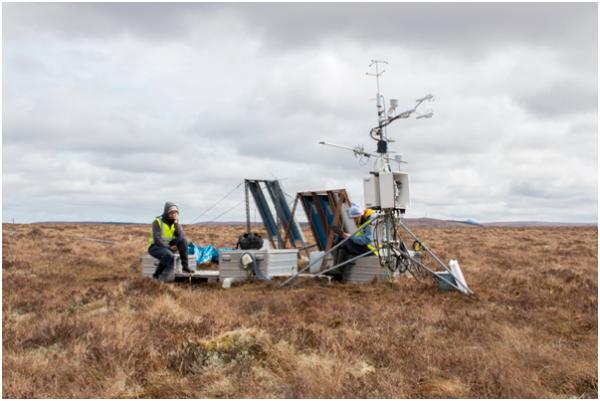 Myroslava and Kirsten at the Pristine Bog Flux Tower Site 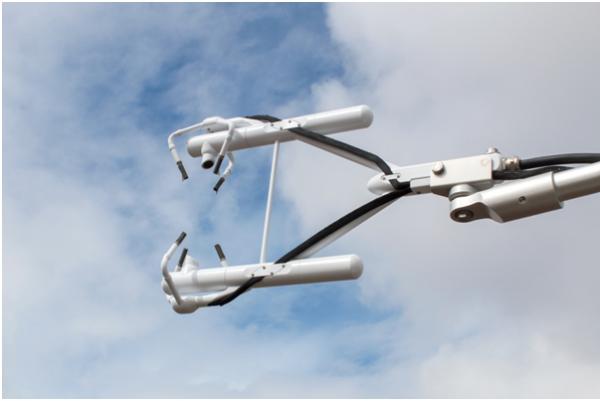 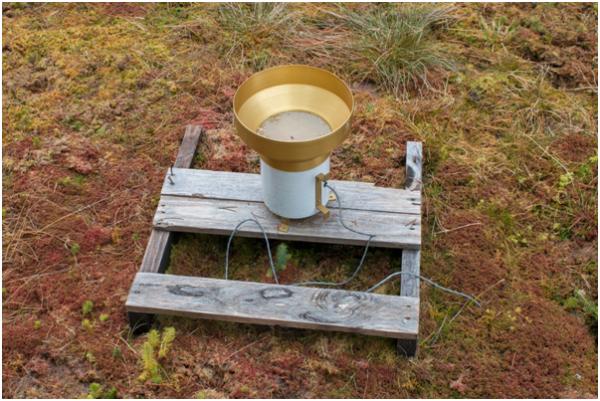 I now begin the process of transforming this expansive body of research and inspiration into new work – a daunting prospect! I hope to create a series of sculptures that synthesises these natural and technological inspirations and can speak of the vast complexities of the Flow Country and the imperative to restore and preserve it. As the flux towers are positioned at sites in various conditions: pristine, forested and at two stages of regeneration, I am interested to use these contrasting sites to situate my potential sculptures. I am exploring the idea of creating a work that makes the functioning/damage of the peatland water cycle more visible and am looking at the microscopic structure of the sphagnum for inspiration on forms and structures that store water. I am also thinking about objects that could potentially float like the islands that naturally appear in the bogs pool systems. Over the coming months I will refine the ideas currently in my sketchbook by focussing on drawing and 3D-modelling sculptural prototypes. The final works will be fabricated over the winter months before being brought back to the peatland for documentation in still and moving image.

Thanks to all who have given their time to help with the project so far. Please visit the links below for more information and updates.

More images from my residencies can be viewed here:
www.hannah-imlach-artist-residency.tumblr.com

Visual updates on the project progress can be viewed here:
www.instagram.com/hannahimlach

Images and information on my previous projects can be viewed here:
www.hannahimlach.com 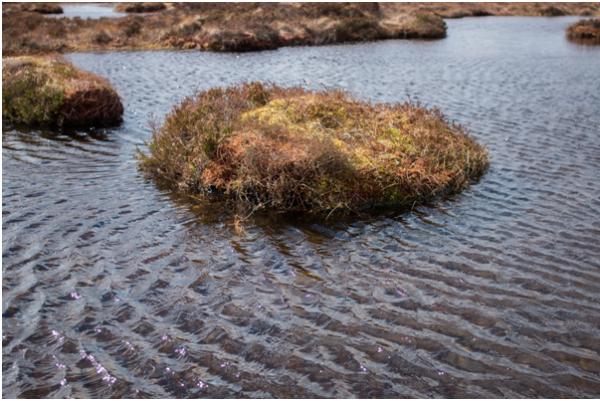