The new draft boundary, covering around 160,000 ha, has taken into consideration all of the comments made during the first consultation, which took place in mid-2019 and highlighted nearly 80% support for the project from the local communities.  Accompanying the boundary is a rationale (a requirement of UNESCO) that lays out what the boundary aims to encompass: in this case, taking in the blanket bog that is in the best condition and displays the attributes that make it outstanding on a global scale.

The proposed site is being nominated for both the exceptional blanket bog and the biodiversity (bird and plant life) it contains.  The drafting of the proposed site boundary has been led by scientists at the Environmental Research Institute (part of the University of the Highlands and Islands) in Thurso and NatureScot and it is now time to start gathering the views of all interested parties to help ensure that the boundary, and the wider project is further shaped by the communities which live and work in and around the site. 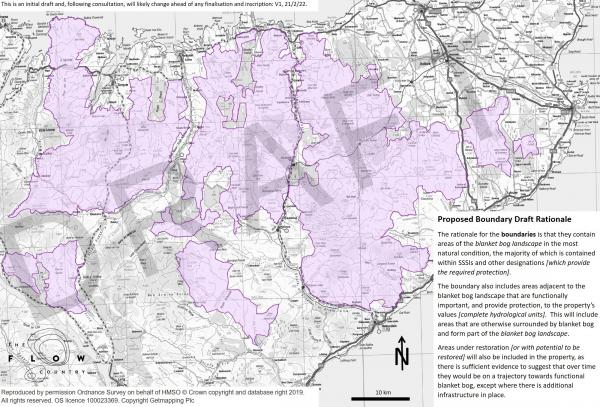 Consultation will begin in the coming months with talks being provided to various interest groups, from which feedback will be welcomed, and engagement with local schools.  As we move into spring, more detailed information will be delivered to everyone in the region through a maildrop which will include instructions on how to access an online consultation portal and the dates and locations for in-person drop in events (hopefully held in May-June).  A series of public talks will then be held to close the consultation process and allow the information to be collated and feed into shaping the final submission.

If the bid is successful, the peatland of the Flow Country will sit alongside the glaciers and volcanoes of the Vatnajökull National Park in Iceland, the Grand Canyon and Yosemite National Parks in the USA, and many more global treasures, on the UNESCO World Heritage List.  Local Councillor, Karl Rosie recognises this a, ‘hugely important step forward in what is an exciting opportunity for the region, putting it on the map globally, and with the potential to bring significant benefits to the area’.