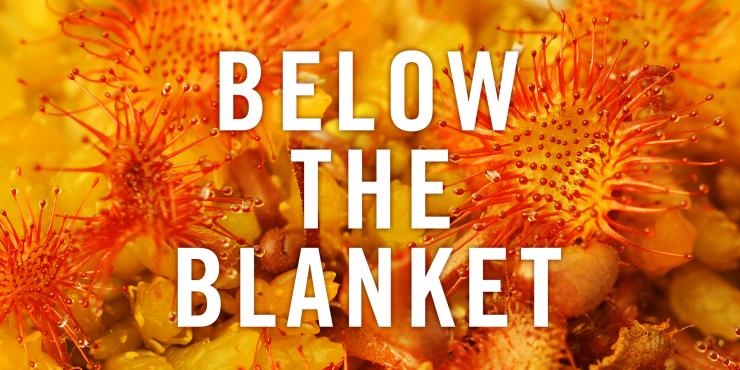 Cryptic present the World Premiere of

at the Royal Botanic Garden Edinburgh

KEEP THE DATE! Join us in Edinburgh during the Festival for a walking meditation through art inspired by the Flow Country.

Leading artists from across the UK have created work in the wilds of Scotland’s vast Flow Country, the world’s largest single expanse of blanket bog and a crucial part of the fight against climate change

Below The Blanket will also feature a new choral work composed by Malcolm Lindsay, recorded and sung live by the Dunedin Consort.

Celebrating 25 years of ‘ravishing the senses’, Below the Blanket comes under the creative direction of Cryptic’s Founder & Artistic Director, Cathie Boyd

This summer, Cryptic will take Edinburgh audiences on a captivating journey to Caithness and Sutherland’s Flow Country - an awe-inspiring 200,000 hectare expanse of deep peat, dotted with beguiling bog pools, which plays a crucial role in fighting the effects of climate change.

Situated in the far north of Scotland, the Flow Country is the largest single expanse of blanket bog in the world and a proposed World Heritage Site. Around 3% of the world’s land surface is peatland, but only a tiny percent of this is blanket bog. Over thousands of years, these environments have formed in cool, wet places, generating a distinctive and significant habitat for a wide range of plants and animals including hen harriers, otters, dragonflies and carnivorous plants.

Below the Blanket is a sensory series of visual, sonic and kinetic installations that will transform the Royal Botanic Garden Edinburgh (RBGE). The project features new work from visual artist and composer Kathy Hinde, composer Luci Holland, visual artist Heather Lander and sound designer Matthew Olden. They have all spent time in residence at the Peatland Partnership’s Field centre on the RSPB’s Forsinard Flows National Nature Reserve in the heart of the Flow Country, creating work directly inspired by the geology, flora and fauna of this unique, little-known area of the Scottish Highlands.

During their residencies, the artists collaborated with local scientists and community groups, learning about the complex biodiversity of the Flow Country and sphagnum moss’ role in the peat bogs’ function as a carbon store.  By harnessing the unique data gathered by scientists in the Flow Country, the artists will bring the ‘Botanics’ to life, merging scientific data with visual sonic art.

Kathy Hinde will present numerous soundscapes, ranging from underground sound recordings taken from deep inside the bog using hydrophonic microphones, creating deep bass tones, to sonifying the Flow Country’s prominent winds. She will also create a water-powered sculpture for the garden’s Dubh Lochan, which will create music on sitar strings and bells when activated.

The activation of the sculptures and movement of the water will be based on data gathered from water level measurements taken from dip-wells, drawing attention to the importance of the water table, and how high water levels and saturation are crucial for a healthy bog environment.

Luci Holland will create an ambient soundscape made up of remixed and layered natural audio found in the Flow Country. Fused with rich orchestral and vocal colours, it will entice visitors through the large hedge archway. On entering the archway, musical and rhythmic stingers will be triggered, representing the majesty and importance of the area, highlighting the impact of humanity on the delicate ecosystems of the Flow Country.

Matthew Olden will install a soundscape ‘Data Flow’ on the narrow path leading up from the Chinese Pavilion, using a 100 plus overhead speaker system  - created with data from the Flow Country provided by David Large (Head of Department of Chemical & Environmental Engineering, Faculty of Engineering, The University of Nottingham) concerning ‘bog breathing’ and relating to the surface ebb and flow of water within the bog.

Heather Lander will create Do Not Disturb |The Permanence of Fragility, a series of sculptural plinths housing microhabitats made of ceramics, ink, paper and paintings, which will be situated under canopies of trees in different locations across the Garden. Her work will focus on the carbon locked in the peat and the sphagnum moss that helps to protect it, highlighting the layering of plant and animal matter which form the peat. It will also reflect on the unique aspects of the peat bogs and the water that is retained in the ground to help create the specific environment for vegetation to thrive and peat to form.

Visual artist Hannah Imlach made a number of visits to the Flow Country in 2017/18, and presents images of her delicate work created during those residencies.  Imlach’s work takes the form of ‘instruments’ which respond to the ecology and restoration of this unique habitat and reference the scientific instruments used on the bog, in addition to a selection of peatland flora.   Photographs of Hannah’s work will be displayed around RBGE and will be accompanied by a film made with filmmaker Daniel Warren and composer Thomas Butler.

Below The Blanket will also feature the premiere of a choral work composed by Malcolm Lindsay, installed as a recording throughout the project and sung live by Scotland’s leading Baroque Ensemble, the Dunedin Consort. On 26 July, 2, 16 and 23 August the Consort will perform the work live amongst the Garden’s huge cypress trees.

Presented as part of The Peatland Partnership’s Flows to the Future Project (with RSPB Scotland as the lead partner), Below the Blanket is produced by Cryptic. The event will run from 24 July - 25 August at the Royal Botanic Garden Edinburgh as part of the Edinburgh Festival Fringe 2019. Tickets (£14, £12 & £8) on sale via cryptic.org.uk/below-the-blanket on Mon 22 April at 10.00.

“Below the blanket bog has been the main inspiration for this project, be it stunning Sphagnum moss or the many millions of tons of carbon which are buried deep below.  We hope this work shares the beauty and vastness of the Flow Country, a wondrous world largely unknown to many, including myself, when I began this project.  The importance this part of Scotland plays to helping offset the effects of climate change cannot pass unrecognised. We need to protect this land, and we need to let nature play its course. I am thrilled that our artists have spent time in the Flow Country whilst also working with scientists to gain a deeper understanding of these peatlands. Blanket bog breathes - whoever would have thought it?!  Thank you to the Peatlands Partnership, RSPB Scotland and RBGE for making this project happen.”

“The inspiration to work with artists came about because we were looking at how to share the Flow Country with people who might never have visited the area. We felt that working with artists would give us special insights and would be interesting and inspiring for a wide audience, and this has certainly proved to be the case. We are particularly pleased that Cryptic have been working with scientists as this gives quite a different dimension as the Flow Country is at the heart of much of the science going on around peatlands and climate change.”

“Undoubtedly one of the most important things that Scotland can do to avert climate change chaos is to protect and restore our precious peatlands, like the Flow Country. Their fragility but also their resilience lies within the intricate network of biological diversity that lies beneath the surface, including the variety of mosses, lichens, invertebrates and micro-organisms that remain hidden and under-appreciated. Below the Blanket is sure to raise curiosity about the cryptic lives of these lowly plants and animals, and will encourage us to celebrate how Scotland’s nature is of global importance.“

Keep an eye on our Below the Blanket page for updates on this.