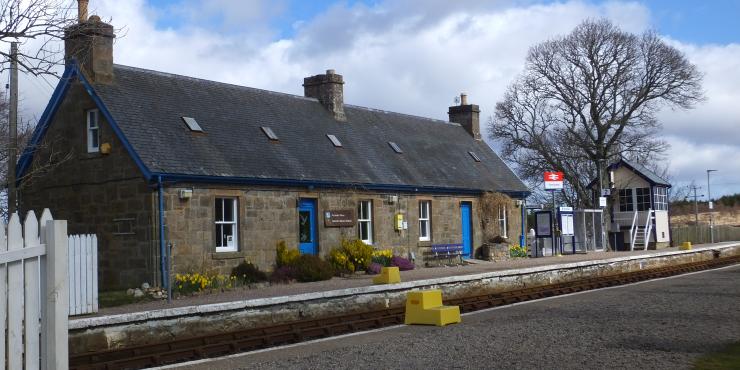 The Flow Country's Flows to the Future team and RSPB Scotland are commemorating the Royal Naval train, commonly known as the Jellico Express, which transported 500,000 military personnel during the First and Second World Wars.

Public event on Tuesday 30 April from 2 until 5pm with workshops, talks, old fashioned cakes and more.

The event takes place  exactly 100 years after the final World War I “Jellicoe Express” train journey, at the RSPB Scotland Forsinard Flows Visitor Centre. The visitor centre is located at Forsinard railway station, one of the scheduled stops along the Jellicoe Express route.

Named after Admiral Sir John Jellicoe, who was Commander of the Grand Fleet and who led the Fleet at the Battle of Jutland, the 717 mile, 22-hour train journey ran daily between London and Thurso during World War I. It transported military personnel to and from the Scapa Flow naval base, across the Pentland Firth in Orkney. It was revived during World War II and it is said to have transported over 500,000 military personnel during the two wars.

The Flows to the Future project team and RSPB Scotland will be honouring the centenary with a day of celebrations and workshops, and they will reveal how Forsinard railway station played a part in the war efforts.

The day will be split into two parts. A morning dedicated to local schools will be followed by a public event in the afternoon.

During the morning session, children from four local schools will travel on the iconic train route before arriving at RSPB Scotland Forsinard Flows Visitor Centre. They will perform songs from the period on the platform at Forsinard railway station.

The pupils will also take part in workshops, led by Flows to the Future project educators and funded by Lottery players through the National Lottery Heritage Fund. They will learn about the history of the Jellico Express and the importance of the Flow Country. They will learn ‘hands on’ how sphagnum moss, which is very common in the Flow Country, was used for wound dressings in both wars and will have a go at making some themselves. Dried sphagnum can absorb up to twenty times its own volume of liquids, and has antiseptic properties, which made it a far superior option to cotton dressings.

Members of the public are invited to join the celebrations and workshops in the afternoon, when a plaque will be unveiled to serve as a permanent memorial to the Jellico Express.

The plaque is sponsored by HITRANS and was designed by Peter Needham from Westray for Another Orkney Production (AOP). Since May 2017, the centenary of the first Jellicoe Express service, AOP have been unveiling plaques at all of the other stations where the Royal Navy train stopped between London and Thurso. This event marks the unveiling of the final plaque along this historic route. Together these memorials make up a unique heritage trail for all to enjoy.

Hilary Wilson, Learning Development Officer for the Flows to the Future project, said, “It’s wonderful to be able to remember this vitally important wartime train and the contributions military personnel provided. This is an opportunity for people to share their family stories and come together to mark this special anniversary.”

The free event is open to the public from 14:00 on 30th April at RSPB Scotland Forsinard Flows Visitor Centre. Booking is recommended. Email beki.pope@rspb.org.uk or call 01641 571225 to book. Arrival by train is recommended and the event is timed to fit in with train times.