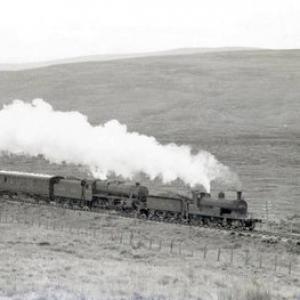 Tuesday 30th April marked the centenary of the final World War I journey of the Royal Navy train, commonly known as the Jellicoe Express.  The Flow Country’s ‘Flows to the Future’ project team and RSPB Scotland hosted a day of celebrations at RSPB Scotland Forsinard Flows Nature Reserve and Forsinard railway station received a commemorative plaque.

The Jellicoe Express service was originally used in the First World War, to transport Navy personnel from London Euston to Thurso, where they travelled on to Scapa Flow naval base in Orkney. Forsinard was the penultimate stop before Thurso and it was where the engines would stop to take on additional water.

The centenary was marked by a day of activities organised by the Flows to the Future (FTTF) Project in conjunction with RSPB Scotland, funded by the Heritage Fund of the National Lottery. The day kicked off with a morning event just for schools. FTTF Project and RSPB Scotland staff and volunteers (merrily dressed in World War I costume!) welcomed just under 100 local children to RSPB Scotland Forsinard Flows National Nature Reserve. Children learned about the Jellicoe Express in a range of activities; they made sphagnum wound dressings, heard stories from Robert Foden (Orkney historian), went on the Dubh-lochain trail - or ‘Sphagnum Safari’ - and much more!

Moya Macdonald (Another Orkney Production) said, “Thanks to the hard work of the Forsinard RSPB team, the final "Jellicoe Express" plaque unveiling was a fitting end to our two-year project. It was particularly special as so many local school children and some of the organisers of previous events came to Forsinard for this final event.” 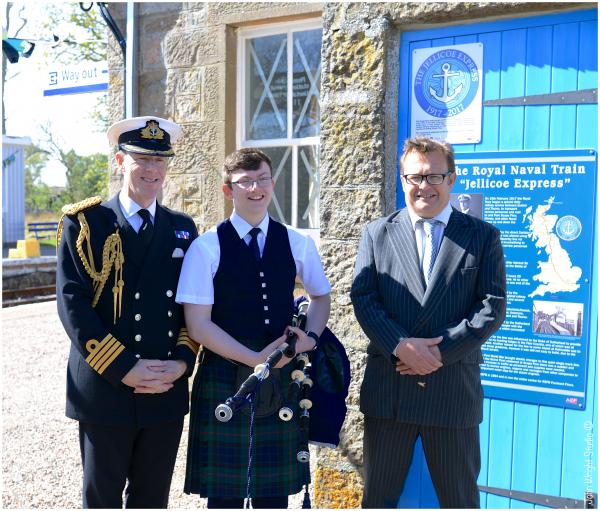 Before they departed by train, the children of Halkirk, Reay, Melvich and Helmsdale gathered on the platform, to honour the memory of the troops through singing a hauntingly beautiful song. Many were moved by the young voices joining together on the very platform where the last Jellicoe Express had stopped one hundred years previously.

Carolyn Castle, a P6 teacher said “Halkirk Primary School have had a fantastic day out at Forsinard. The children learned lots about life in 1919. Thankyou!”

The afternoon event was well attended by members of the local community and dignitaries including Flag Officer of the Royal Navy, Chris Smith, Lord Lieutenant for Sutherland Dr Maine, and the Lord Lieutenant for Ross and Cromarty, Mrs Janet Bowen. Everyone congregated on the platform for the unveiling of a commemorative plaque by a cheery Johnny Jellicoe, the grandson of Admiral Jellicoe. Afterwards visitors gathered in the marquee for tea and ‘trench cake’ (old in style not in age!) and to share memories and stories.

Morag Mitchell of Thurso said “It was absolutely excellent and we learnt a great deal about the Jellicoe Express. It was lovely to see so many school children from local schools involved” 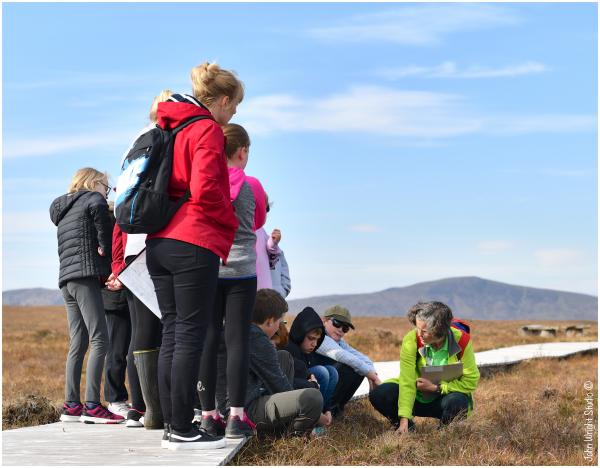 Find out more about the Jellicoe day at Forsinard with the BBC Radio Scotland podcast!

The Jellicoe event at Forsinard was part of BBC Radio Scotland's "Out of Doors" programme - listen to the podcast here! 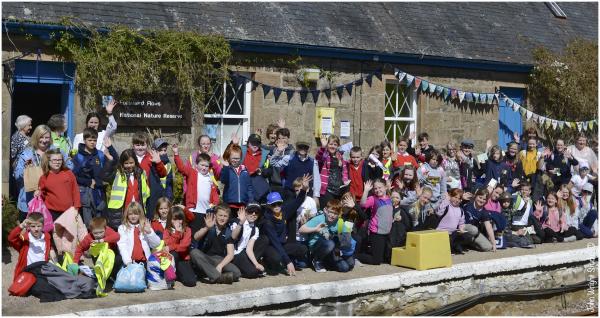 There once was a train...

Children of 4 local primary schools - Halkirk, Reay, Melvich and Helmsdale - joined together on Forsinard's station platform to sing, commemorating the Jellicoe Express and remembering the soldiers and sailors it transported. Listen to their beautiful songs here:

The unveiling of the plaque was accompanied with piping by Lewis 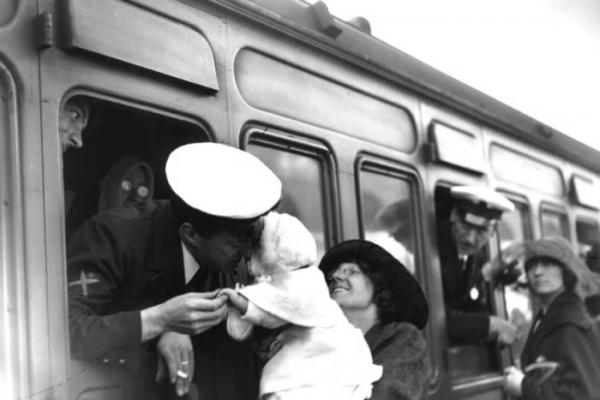 Memories of the Jellicoe day

The Jellicoe event at Forsinard was a wonderful occasion to share stories and memories. Listen to a few of them here:

The doctors and the nurses

And call on us to send them

The dressing that they prize

No other is its equal---

In modest bulk it goes,

Until it meets the gaping would

Where the red life blood flows,

It checks the fatal loss,

And kills the germ, and heals the hurt-

- Mrs AM Smith, 1917, a member of the Edinburgh War Dressings Supply organisation

Covering the peatlands of Caithness and Sutherland with a squishy, colourful carpet, Sphagnum moss is one of the Flow Country’s most prolific plants. Its importance for the formation of peat, which serves as a huge carbon store, and its other ecosystem services cannot be emphasised enough. However, Sphagnum moss never ceases to fascinate and has yet another amazing function to add to its list! “The kindly sphagnum moss”, that was so highly praised in the poem by Mrs Smith, a member of the Edinburgh War Dressings Supply organisation, was used in the making of wound dressings during WWI. 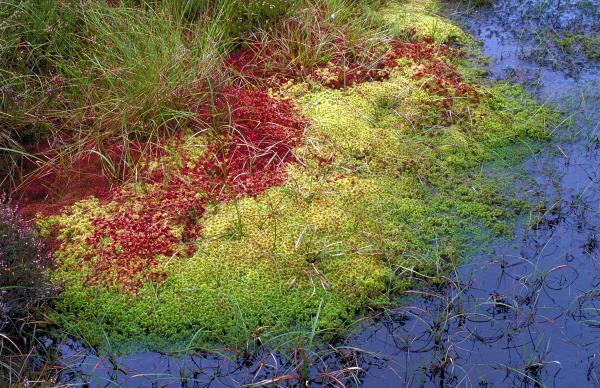 The Great War was by no means Sphagnum moss’ first appearance in medicine - it had been used to treat wounds with for centuries, with historical records going back to as early as 1014 in the battle of Clontarf in Ireland. Yet if it hadn’t been for Lieutenant-Colonel Charles Walker Cathcart, the Allies might never have been able to partake of this ancient wisdom. Cathcart was a surgeon on wartime duty and – aware of research and usage of the moss in Germany - brought Sphagnum moss’ value to public attention in the UK through publishing an article in the Scotsman newspaper together with his friend Professor Isaac Bayley Balfour, Regius Keeper of the Royal Botanic Garden Edinburgh. With prevalent fears of cotton shortages and experiments with alternative materials, Cathcart’s suggestions fell on fertile ground and, after a try-out, Sphagnum dressings were formally accepted by the British War Office in September 1915.

Surely, Sphagnum moss was far from being a mere makeshift alternative to cotton – it was in fact superior in many ways. With its ability to hold up to 20 times its own weight in liquids, it can absorb at least twice as much blood, pus and other bodily fluids than cotton, and does so more rapidly and evenly.

Sphagnum moss’ astonishing absorptive qualities are due to its special cell structure. For its green photosynthetic cells are interspersed with another type of cell – dead, empty and much larger. These cells account for Sphagnum moss’ sponge-like quality of soaking up liquids.

Yet sphagnum moss does not only surpass cotton in absorptiveness, it also has another special and incredibly useful property to give it an edge over cotton: it is antiseptic. With a high rate of wound infections in WWI and an uncertain antiseptic chemical situation, its inherent ability to inhibit bacterial growth evidently recommended Sphagnum moss for usage in wound dressings. But how does the tiny plant do it? By actively releasing hydrogen ions, which increase acidity and thus lower the pH, Sphagnum moss creates unfavourable conditions for pathogenic bacteria that would otherwise thrive on the pH of human blood. 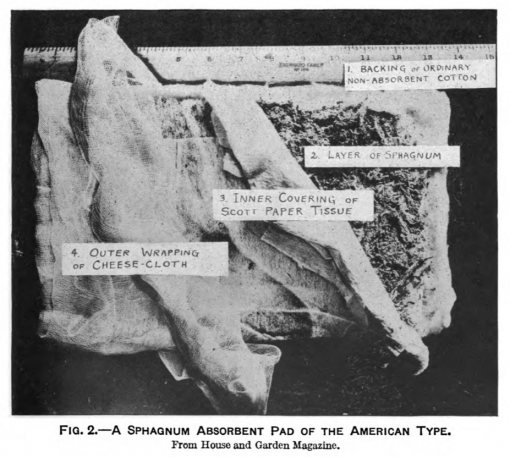 It is thus hardly surprising that the production of Sphagnum dressings skyrocketed in the course of the war with a modest monthly output of 250 dressings turning into 1,000,000 towards the end of the war. 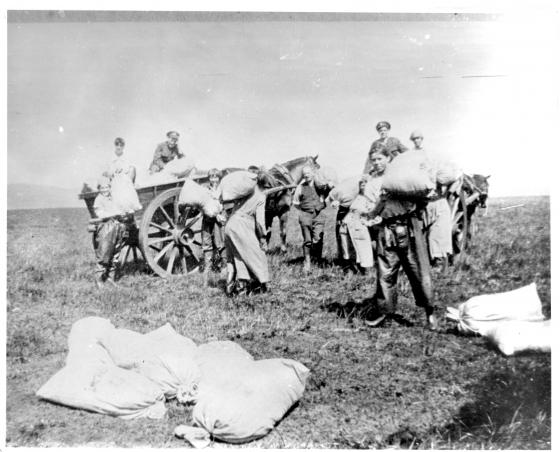 To meet this high demand, Sphagnum moss had to be collected in large quantities, for which purpose camps were often set up close to or on the moors. The workers were mostly holiday parties, boy scouts and equivalents, convalescents, refugees or prisoners of war. Schoolteachers were called upon as well to assemble groups of pupils during the school holidays. The collectors would take the moss out mostly by hand, give it a quick squeeze, and place it in sacks for it to be transported to a drying centre. It had to be cleaned of grasses, twigs and other material, preferably while still damp, and was then left to air-dry. 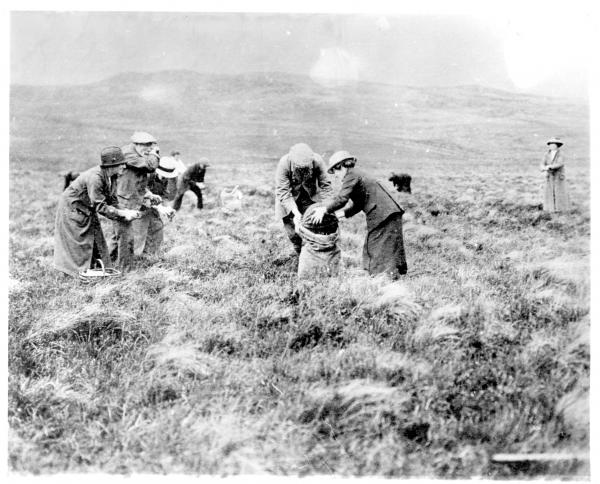 However, not every Sphagnum species was equally well suited for wound dressings, and Sphagnum palustre and Sphagnum papillosum were singled out as the most apt species. In the final preparation of the dressings, muslin bags were filled with the dried Sphagnum and sewn up as the most basic version, which was authorised by the British War Office. The Canadian Red Cross added tissue paper to contain the Sphagnum and the typical American Sphagnum dressing had an additional non-absorbent cotton backing. Thus prepared, Sphagnum moss could work its healing powers in war hospitals all over the country. 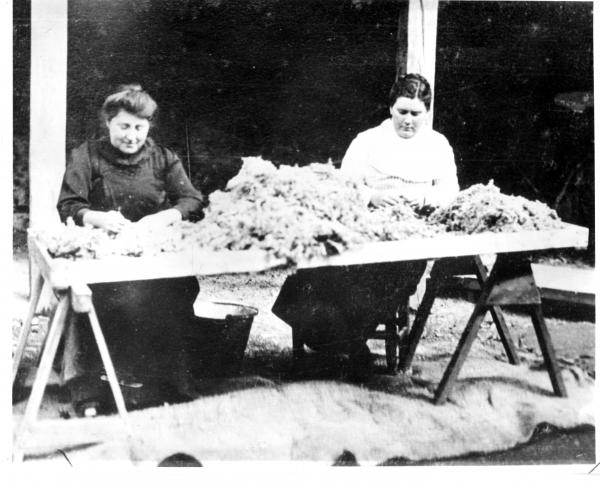 The Jellicoe Express - in numbers! 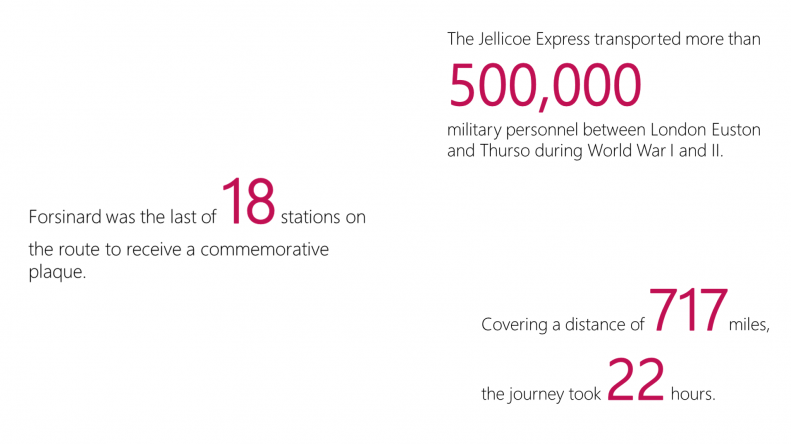 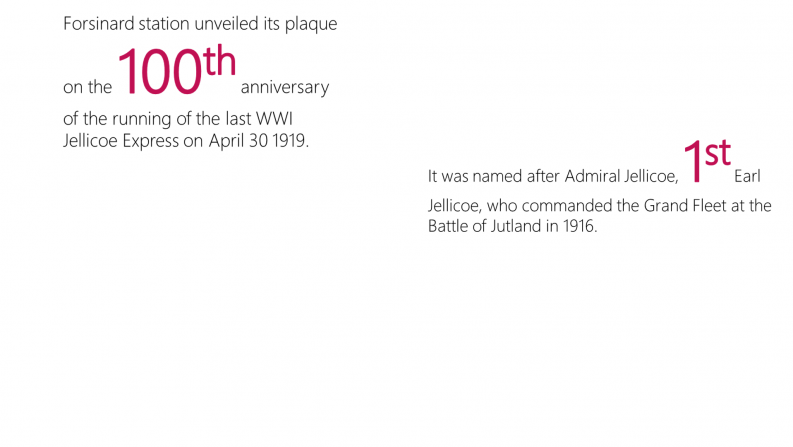 Preliminary Report on Sphagnum Areas in the South of Scotland-Edinburgh Area by William Wright Smith, M.A.

Memo re Gathering by Rev. A. Forman

Wound dressing in World War I – the kindly Sphagnum Moss

‘A Modern Herbal; the Medicinal, Culinary, Cosmetic and Economic Properties, Cultivation and Folk-lore of Herbs, Grasses Fungi, Shrubs and Trees with All Their Modern Scientific Uses’ by Maud Grieve