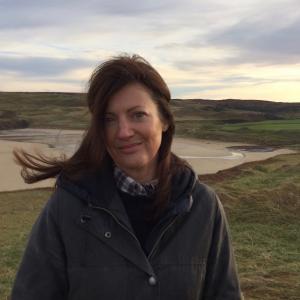 My husband is a keen surfer and the north coast has some of the best waves in the UK. We used to come here for weekends in our homemade camper, leaving after work on a Friday, and returning home on a Sunday night. I loved those weekends more than anything – waking up to salt air and getting the camping stove lit. When I wrote the poem 'Flow Country' we’d already been coming here for seven years. The poem appeared in the anthology My Favourite Place, published by the Scottish Book Trust in 2012. The year after that we bought a cottage overlooking the sea, and finally made the move north.

Another bridge, only here at Dornoch the tide

is out, mudflats stretching into the summer dusk

with endless glowing puddles, while out to sea

it is as white and intangible as heaven. We’ve made

this journey many times, first in your R-reg Transit,

and now in the silver VW, but always loaded with

your surfboards and a yellowing Silentnight mattress,

my books piled about the floor on the passenger’s side

(usually some Neil Gunn, which I will insist

on reading aloud even though you hate it).

In the hills around Golspie, I see a house,

one window lit, and this is what I’m thinking,

while you drive up the coast in the falling light:

one day, the mattress – the one your upstairs

neighbour gave us, seven years ago

when we were just kids –  will be replaced

with our sofa, and boxes of bubble-wrapped

crockery, and we will carry it all north,

where we belong, and the books in the footwell

will be lined-up in a cottage whose lintels

were long-ago dug from the ground.

The road bobs and dips so we feel more

like a ship at sea, and just as we reach Portgower

it drops into the rocks and surf, as we round

the bend into the village. We cut across the flói*

on the back road to Melvich, forty miles

of single track. White moths from the peatlands

flutter past in the headlights, and it is here,

by cloud, that we see Loch an Ruathair, shining

like a shard of moon half sunk in the bog.

I buzz my window down and the moor whips

away the feelings I’ve been carrying since

we left the grey office block on the outskirts

of the city; the dubh lochans are deep enough

to hold all manner of worldly sin, and those

graphs and spreadsheets, the figures

and the sums, sink easily below their surface,

so that all that remains is a scum around

the deer grass and sphagnum. And I breathe.

as though viewed through a fisheye lens.

And now as you drive, I am thinking of morning,

when we will walk on the beach, and the sea

will be curdled with white froth, and we’ll stand

by the edge and listen, because we have nothing

more pressing to do, to the roll and wash

of the waves, the slop, and the slow

While the landlord of the Halladale Inn is busy

pulling your Guinness, a local leans on the bar;

he’s spotted the van outside and wants to know

how far we’ve come and where we’re stopping,

and my mind catches on the burs of his tongue.

This is how it sounds to my lowlander ear –

it’s a stove ticking and wind in the pipe,

the whisper of blown sand and patter of hail,

a gate clinking as it yawns on its hinge.

At Strathy, we park above the dunes,

pulling up near the graveyard’s stone dyke,

and I will pray the dead don’t mind,

and we step into the night to brush our teeth

in the long grass. All the clouds have gone

and you pull me close, tell me to look up.

Night is different in the far north.

We stand there for a long time, cradled

in each other’s silence, and by the waves

that are breaking, far, far, below.

* old Norse, most usually written as ‘flow’ but pronounced to rhyme with plough

Laura Morgan writes short fiction. She is published in The Moth, Causeway/Cabhsair, Northwords Now, Words from an Island, and others. Her stories have been long and short-listed for various competitions including the Bristol Short Story Prize and the Colm Tóibín Award, and she was runner-up in the 2016 Brighton Prize. Laura also has her own place-writing blog.