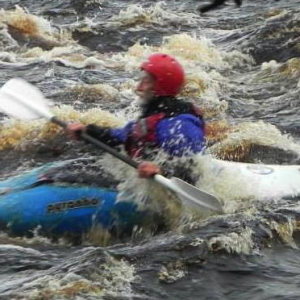 Ben Macgregor, also known as Ralph, is a Caithness-based writer, photographer and nature enthusiast. Over the years, he has spent many days exploring the Flow Country on foot and by bike. Ben is also the voluntary MBA maintenance organiser for the Croft House, a bothy in the Strathy area. He publishes through Curlew Cottage Books, http://www.curlewcottage.com 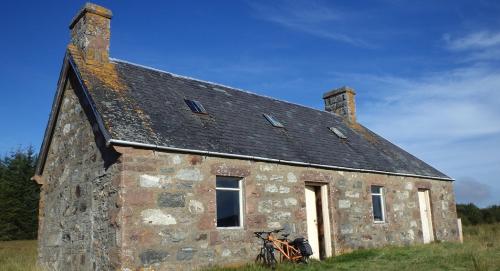 The Croft House, one of the MBA bothies in the North of Scotland

A dozen miles south of Strathy the vast, silent forestry plantations finally give out into the high, remote flow country. Here sits  the empty Lochstrathy House, more often known simply as the Croft House. The worn staircase to the upper floor testifies to the families brought up in this isolated location but nobody has lived here permanently for at least 60 years. Now, there just is a huge sense of quietness.

I first visited nearly 40 years ago, walking the seven or eight miles across the moor from Strath Halladale. Only a few academics then knew this area as something special, to locals it was of little use other than for a bit of stalking and grouse-shooting.  I can’t say I was that impressed either, it was rough, wet going  and even then folk had been exploiting available grants, in this case  for digging long gently curving drainage ditches which stretched for miles and rather spoilt any sense of wildness. When it became possible in the 1980’s for rich people to plant trees instead of paying tax, the whole area began to disappear under vast forestry plantations at a terrifying speed. 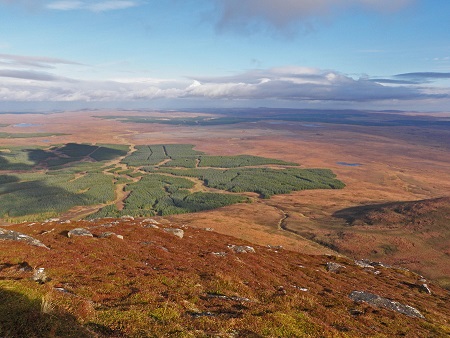 Those who knew the true value of what became known as ‘the flow country’ realised they should have stood up for these world-important peatlands many years earlier, and a huge amount of  damage was done before this completely uneconomic planting of slow-growing trees was stopped. Dozens of miles of roads were built to service the plantations and these still remain today, giving the walker or mountain-biker easy access to formerly very remote places.

An August visit to the Croft House. Most of the birds have flown, the moors are quiet. Southwards the wetter areas, with deep peat and dubh-loch, look much as they would at any time in the last few thousand years. Here was a strange circular pit maybe three metres across and as deep, with a stony bottom. Fall in there and you’d never get out… I never found it again. The drier slopes would naturally be covered in birch and willow,  as witnessed by a small wooded island in a loch which the deer cannot easily reach. That made an enticing objective for a morning swim, discovering dense undergrowth and an environment completely unlike the bare country around. 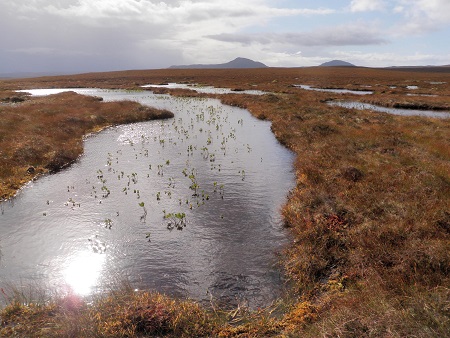 Dubh Lochans, near the bothy

Over the whole vast area the insects were king. Clegs homed in all the time, flies buzzed, midges gathered downwind. After wheeling the bike over the moors I cycled eastwards for hour after hour down long dusty tracks though endless plantations, August sun beating down, insects attacking whenever I stopped, it could have been remotest Finland or Canada.

Once I trekked for a week from Helmsdale across to Tongue and Cape Wrath, coming in to the Croft House from the top of Ben Griam Beg, tramping over knobbly Sutherland tops like  Cnoc nam Tri-clach (yes, you can see the three stones of the name) by lochans haunted by wailing divers and slopes skimmed by golden eagles. I just need to close my eyes to hear the minor-key song of the greenshank and the piping golden plovers to whom these wide landscapes are the early-summer home.

Several times I have sloshed in from the west, the Strathnaver road is only five miles away, but since I took on the task of looking after the building for the Mountain Bothies association, the easy twelve-mile cycle down the track from Strathy has been my normal approach.  Near the bothy you need to ford the river, someone who had lived in Africa once said at this place that you should watch out for crocodiles! Maybe not, but visitors to the bothy have indeed seen a huge black cat-like animal leaping in a single bound the whole width of the track, where it runs between banks . ‘Watch out for the barn-owl’ said a recent entry in the bothy book, I took no notice and was getting the ladders down from the rafters in the store when a bird with a big white face shot silently past me and disappeared out of the open door.  Then there were hen-harriers, four of them, just by the ford. 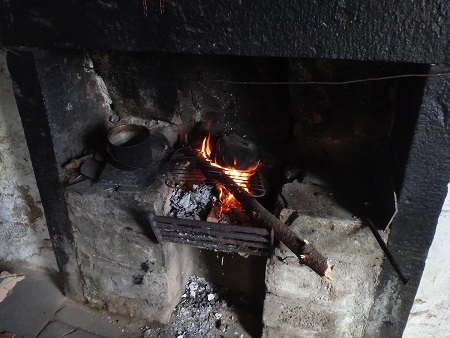 The building needs some work, decent skylights to replace the current ones which blow out every winter, some painting and pointing, a general spruce-up. But a wind farm scheme is planned for the forests around the bothy itself. The Mountain Bothies Association is willing and prepared to do the work if the wind farm does not go ahead. Otherwise, this piece will serve as a requiem for the Croft House and the flow country around.